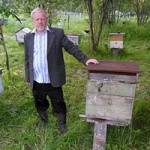 History of the Siberian bee

Visiting different sites on the Internet stumbled upon a forum to discuss the causes and consequences of so-called syndrome of sudden destruction of bee koloniy.I deducted there is an interesting post where the author wrote that, before the bees in Siberia was not an abundance of floral rassteniy.Glyadya colors in the Siberian taiga becomes smeshno.No one author is right, even two hundred years ago, the vast territory from the Ural Mountains and to the Pacific coast, the bees were not, and the main pollinators of all this diversity, fragrant flowers were other insects.
So how do you appeared in Siberia honeybees? Argued that the bees in Siberia were imported through western Siberia to the Southern Altai, in the current territory in near Ust-Kamenogorsk in Kazakhstan, a former district of Tomsk Biysk gubernii.Pchel brought to the exiles of Old Believers, exiled to Siberia the late eighteenth century from Polshi.Pchely of Bashkortostan, thirty-decks, were brought the commandant of the fortress of Ust-Kamenogorsk Maj. Skalon winter, one thousand seven hundred and seventy-fourth year, and were distributed to the neighboring farmers, the Old Believers to care.
In the first season of the deck gave two or three swarm, but because of the small stocks of food were lost in the very next zimu.No nevertheless possibility of keeping bees in the south of Western Siberia was dokazana.Posle this potytki importation of bees in Siberia occurred not odnakratno.
The next attempt was made commander of the Dragoons of Ust-Kamenogorsk fortress, Colonel Nikolai Fyodorovich Arshenevskim.Zimoy one thousand seven hundred and ninety second year he has delivered the bees from his estate, presumably because Ukrainy.Etot man was a big fan of beekeeping, and thanks to good care after two years began prodoval swarms krestyanam.Sibirskie local beekeepers in full right to consider this person a founder of the Siberian beekeeping.
At the beginning of the century devyatnadtsatogo bees began to spread the Semipalatinsk and Biysk okrugam.Pchelovodstvom engaged farmers attributed to the mountain plants and the Cossacks, the best bees themselves felt in the mountain valleys of the southern slopes of the Altai gor.K one one thousand and sixty second year in the Altai mountain district already had two hundred and fifty thousands of decks and honey was exported to Irbitsky fair.
At the beginning of the century devyatnadtsatogo bees were imported in the Tomsk region, and in eighteen hundred and seventh year merchant Chernogubov had introduced bees in the vicinity of Kuznetsk, the current Novokuznetsk, and beekeeping beginning to develop successfully in Kemerovo, Tomsk region oblasti.Iz &#8203;&#8203;bees were brought to the Yenisei province and farther east until the Trans-Baikal, and then to the Far East.
The number of families grew from year to year, increases the production meda.No overall productivity of the bees was low, about 5 kg kolody.Eto of illiteracy care of bees and isspolzovaniem kolod.S start of frame hives and the emergence of education for beekeepers, the average trade honey collection, called the Regional Level honey harvest (RUM) in the same Kemerovo region in the late twentieth century was about twenty pounds to one family of bees.
Теги: siberian bee
Осмотр пасеки Весенняя Салаирская тайга 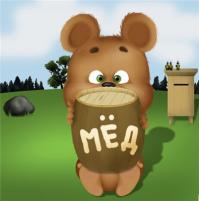 Sibroy #
10 августа 2011 в 04:57 Рейтинг: 0
Hi!!!
That's a much better and more interesting)) In the process dragging the site to another hosting service, something that "got lost" on the way)))
Ответить